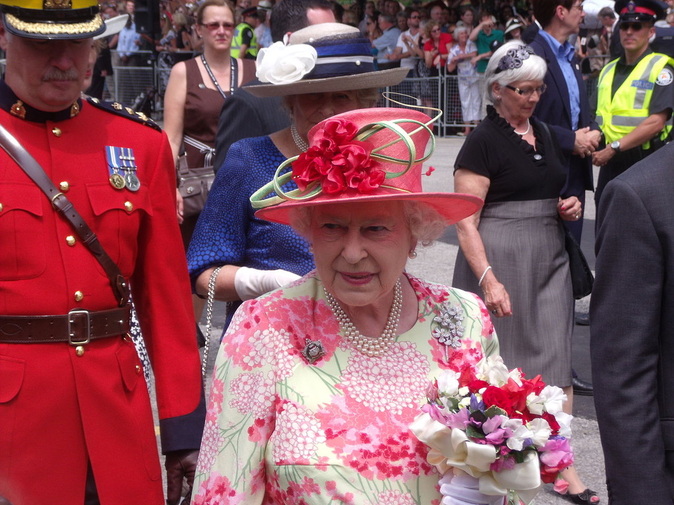 Her Majesty in Toronto, 2010
Terms of Support: Monarchists, Royalists, and Royal Watchers

Support for Canada's monarchy is often for diverse reasons and as a result takes different forms. Some people have an interest in monarchy as a government type, some have an interest in preserving Canadian history, some have a particular loyalty to the person of the monarch, some enjoy the monarchy's pageantry, and yes some like the dresses and funny hats.
However, the diversity of reasons for liking the monarchy does make a catch-all term difficult to devise. Predictably the media has notable trouble with this. I've taken the liberty of broadly classifying three different types of monarchy supporters. These are my own definitions so feel free to disagree or suggest your own. So here is my take on things:
Monarchist
A person who supports monarchy as a government type. Tends to be more interested in politics and the goings on of the government. Monarchists tend to be able to tell you how the monarchy functions and what its role in government is. This category represents loyalty to an institution rather than loyalty to a person. Monarchism is often (but not always) the underlying foundation of the next two categories. As the site name implies this blog is monarchist in nature.

Royalist
A person who supports, or has an interest in, a specific member of the royal family. This category tends to only to be needed when royalists support different candidates for the throne (such as the Carlists in Spain or the Jacobins in Britain). People who prefer Prince William to his father would be classified as royalists. Perhaps due to their focus on individuals they tend to be knowledgeable about the different kings and queens of their country, what they accomplished, and why they like/dislike them.

Royal Watcher
A favourite term of the media. A royal watcher is someone who likes the glamour, prestige, appearance, class, and spectacle of the monarchy. I will first say there is nothing wrong with this category. Afterall, the monarchy is interesting and worth celebrating. What is problematic is when the media lumps all three groups together into this category in an attempt to create the impression of a royal 'fan club'. A royal watcher tends to be able to tell you what the members of the royal family have been up to lately, their interests, and will most likely have travelled to meet them at some point.

These terms are by no means exclusive and most supporters of monarchy cover a bit of all three. And, as I said, these are my classifications; your mileage may vary.